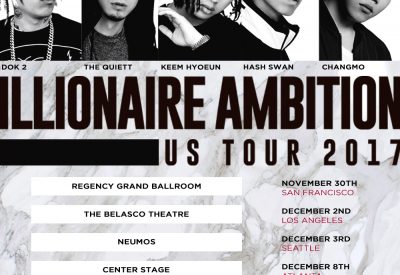 Two of the most esteemed and recognizable crews in the South Korean hip hop industry, ILLIONAIRE and AMBITION, will be making their way to the U.S for their first ever co-headlining tour. Through their involvement during several seasons of one of the most popular shows in South Korea, SHOW ME THE MONEY, they’ve created noise in the Asian music industry, becoming one of the most sought after groups for collaborations, shows, and production. This 2017 tour will bring together for the first time in the US, Dok2, The Quiett, Changmo, Hash Swan, Keem HyoEun

All the Dates and Cities are as Follows: